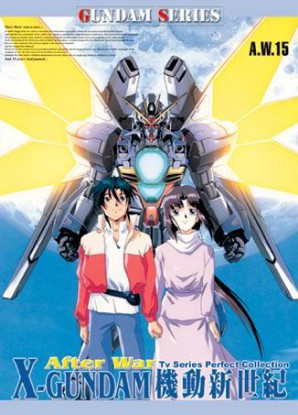 Plot Summary: When one space colony declared its independence from United Nations Earth, the devastating 7th Space War, an all-out war between Earth and space, resulted. The UNE responded to the Space Revolutionary Army with mobile suits, called Gundams. However, the SRA forces played their trump card and dropped hundreds of space colonies onto the Earth, plunging the planet into a seven-year-long nuclear winter. The UNE collapsed, but the SRA was unable to invade the Earth in the aftermath of the colony drop. Fifteen years have passed. The year is now After War 0015, and a New UNE has sprung up on Earth to restore order. In space, the colonial leaders have been rebuilding their own forces as well. By chance, fifteen-year-old Garrod Ran has discovered an old UNE mobile suit, the Gundam X, and now he uses it to help out the Vulture ship Freeden in its struggle to keep the powers that be from repeating the mistakes of the past. Genres: action, adventure, drama, romance, science fiction Themes: Mecha, Real Robot.