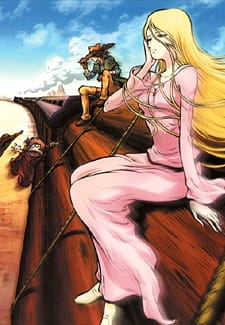 Plot Summary: It is a harsh and barren wasteland, where the weak aren't allowed to dream. It is also a sacred land for true men, for there is no place a man can feel more alive. This is the Gun Frontier. Sea Pirate Captain Harlock and the errant samurai, Tochiro arrive in the United States on the Western Frontier. Along with a mysterious woman they meet along the way, the two friends challenge sex rings, bandits, and corrupt sheriff. They are searching for a lost clan of Japanese immigrants, and they will tear Gun Frontier from end to end until they find it..