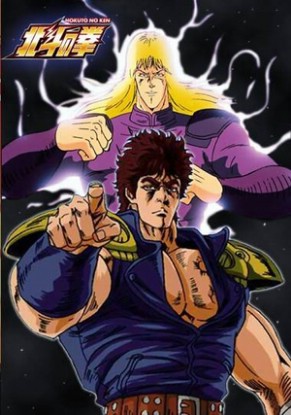 Fist of the North Star

Plot Summary: In a post-nuclear future, human race has made many steps. Normal people have become slaves, while genetically modified giants rule the world. Gunpowder is a distant memory and martial arts is the only weapon a man can count on. Two schools face each other in the battle for dominion: Hokuto and Nanto. Kenshiro is the rightful successor of Hokuto school, while Shin is Nanto’s. Shin stole Ken’s girlfriend Julia and Ken is looking for her. Kenshiro travels the barren wasterland of post-apocalyptic Earth as seeks to rescue Julia. As the series progresses, we are introduced to the six Grand Masters of the Nanto Seiken school, as well as Kenshiro’s three adoptive brothers, also trained in the art of Hokuto Shinken. Eventually, Kenshiro’s ultimate rival becomes none other than his eldest brother, Raoh, a would-be conqueror who does not recognize Kenshiro as a worthy succcessor..

Fist of the North Star