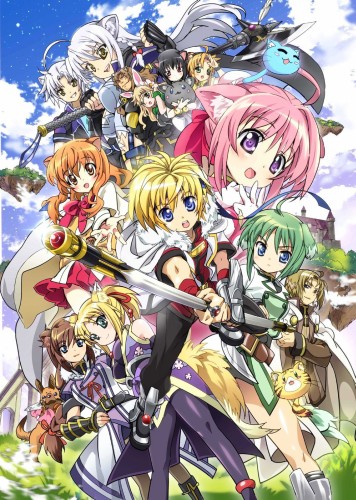 Plot Summary: Princess Millhiore of the Biscotti Republic decides to summon a brave warrior from an alternate world — that happens to be Earth — to defend her country from the neighbouring fiefdom of Garrett led by the powerfulLeonmitchelli Galette des Rois. The "brave warrior" turns out to be an athletic boy named Cinque, visiting the international school in Kinokawa City. On arrival in this fantastic world, Cinque, quickly takes on the role of a successful hero. There is a downside to all this though: Once summoned, a return to the hero's world of origin is no longer possible, as the disclaimer in tiny alien writing on the magic circle explains, that Tatsumaki used to teleport Cinque to this world. The temporary fun-packed visit to this strange land, has become quite permanent as it seems.Will Cinque be able to cope with all the adventures of this new reality?.