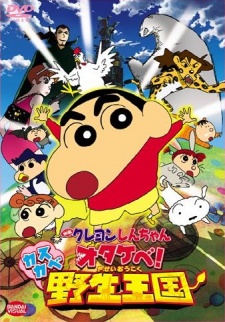 Plot Summary: Comical action adventure film including a caricature of radical ecoactivism and theme of bond between mother and children. The new mayor of Futaba Town, Kasukabe-City, Saitama Prefecture, Mamoru Shizan promotes ecology activities, but his true identity is the leader of an eco-terrorist organization "SKBE: Save Keeping Beautiful Earth", and he launches a plan to transform human into animals by making them take a drink to change into animals. By taking the drink, Shinnosuke's father, Hiroshi changes into a chicken, and his mother changes into a panther. With a mystery woman Victoria, the Nohara Family and half-animalized members of Kasukabe Defense Forces fight against SKBE to stop Shizen's plan..