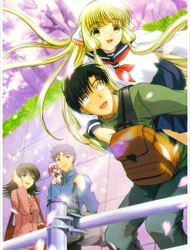 Plot Summary: In the future, personal computers have developed into "Persocoms", mobile computers that look like human beings. Hideki Motosuwa, a prep school student, desperately wants to buy a Persocon but cannot afford to. One day he finds a Persocom that has been thrown away and decides to keep it. When he turns on the Persocom, all she can say is "Chi" so he decides to name her that. After a while it starts to become apparent that Chi is more than an average Persocom. Having much better performance, it seems that Chi might be a "Chobit", a type of advanced Persocom rumored to have independent thought..