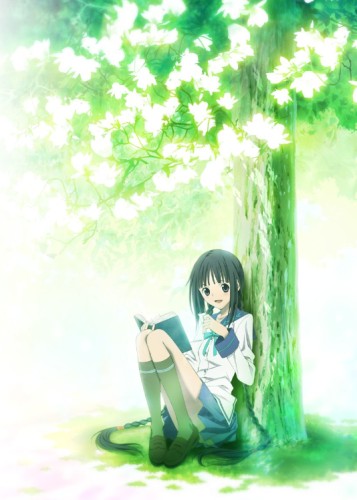 Plot Summary: The story is in the motif of Japanese classic novel Night on the Galactic Railroad (Ginga Tetsudo no Yoru) written by Miyazawa Kenji, set in a high school and its literary club. Inoue Konoha, a second-year high school boy who suffers a trauma, is one day partly forced to join the literary club by the club president Amano Tooko. Amano Tooko, a high school senior who calls herself the Literary Girl (Bungaku Shoujo), is actually a spectre that devours stories — she tears pages from books to munch on them. Every day thus Konoha writes stories for Tooko to eat. He once wrote an award-winning novel, but he wrote it under the pen-name Inoue Miu so readers thought the author was a mysterious 14-year-old bishoujo novelist. Following his trauma he stopped writing at once, but forced to provide Tooko's snacks, he starts writing again. And so the two live a peaceful everyday life. However, one day the origin of his trauma, a girl named Asakura Miu, appears in front of him....